October update is also loaded with some huge customization options

Mojang has announced that a major update for Minecraft on Windows 10 and the Pocket Edition will be arriving in the middle of next month, bringing with it a raft of new customisation options in the form of add-ons, and improved VR on the PC thanks to added support for the imminent Oculus Touch controllers.

Those Windows 10 players who want a more immersive virtual reality experience will be pleased to hear about support for Oculus Touch – even if they weren’t so pleased to discover the cost of the latter accessory, which turned out to be far pricier than we were expecting.

Of course, we don’t have a firm launch date for the Touch controllers yet, but given this Minecraft update is out on October 18, who knows, we might see the peripherals hit the shelves by that time. Furthermore, Mojang is also adding support for the Xbox One wireless controller in Windows 10 (and also for the Gear VR version).

In terms of actual content, though, the major addition with next month’s update is add-ons, which take tweaking the game to a new level, enabling the easy customization of all sorts of bits and pieces on PC and Pocket Edition.

For example, you can change models and textures to make mobs completely different, and also alter their behaviors, or other variables such as the blast radius of a creeper. All this can be achieved by simply editing text files, so it’s a snap to produce something like a ride-able chicken, for example. In the future, you’ll be up to modify even more elements, for example altering blocks or items. 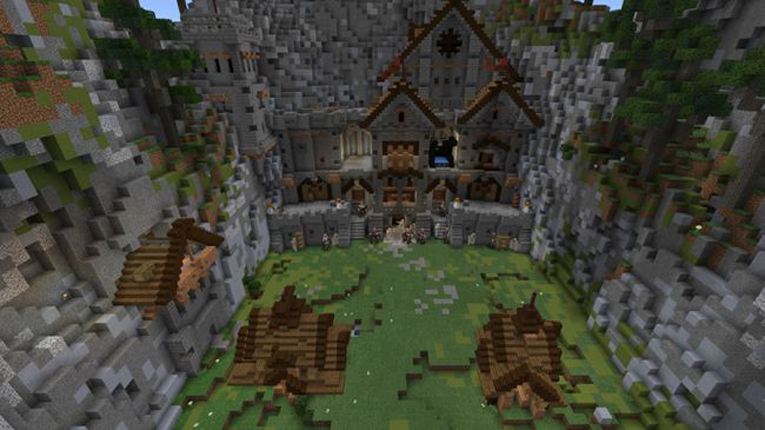 The grand results of all this can be pretty impressive, as the developer showed off back at E3 with the Alien Invasion add-on. This, and another sample add-on called Castle Siege (pictured above) – which involves defending a fort against a mob invasion, or joining the latter and attacking – will soon be made available for players to try out.

There’s another big addition with the October patch, and the fact that it’s called the Boss Update gives you a slight clue as to what this will be. Yes, boss battles are arriving on Windows 10/Pocket Edition, presenting players with formidable challenges in the form of foes such as the Elder Guardian.

The update also introduces ‘slash’ commands, giving you the ability to change the time or weather, teleport around, summon stuff and so forth. All good fun.

In other recent news, we heard that Minecraft: Education Edition, the version of the game aimed at schools, will go live at the start of November.